3a – The Multidimensional Universe

The hidden dimensions and unseen realms make up a much larger proportion of the universe than the physical parts which are visible to us – physicists know this and call the unseen parts “dark matter” and “dark energy”. Conventional science has not yet theorised a plan of these higher dimensions so we must look to ancient knowledge and alternative science for the answers.

The following passage from the ancient Hindu text, the Vishnu Purana, states much the same thing as Pythagoras did: “This universe, composed of seven zones … is everywhere swarming with living creatures, large or small … so that there is not the eighth part of an inch in which they do not abound”. Eastern spiritual science describes seven planes – the lower planes express more of the matter aspect and are therefore more “material”, and the higher planes express more of the energy aspect and are therefore more “subtle”. The seven planes are not specific locations; they all interpenetrate each other and occupy the same space (like different frequencies of reality). Different levels of consciousness are required to perceive the different frequencies, dimensions or planes.

Kabbalah has its own system of cosmology called the “Tree of Life” (see Figure 3a). It has ten Sephiroth or “worlds” that correspond exactly with the seven planes of the Eastern systems, which can be seen in Figure 3b.

Figure 3a – The Tree of Life

There are several important points relating to these diagrams that require explanation: 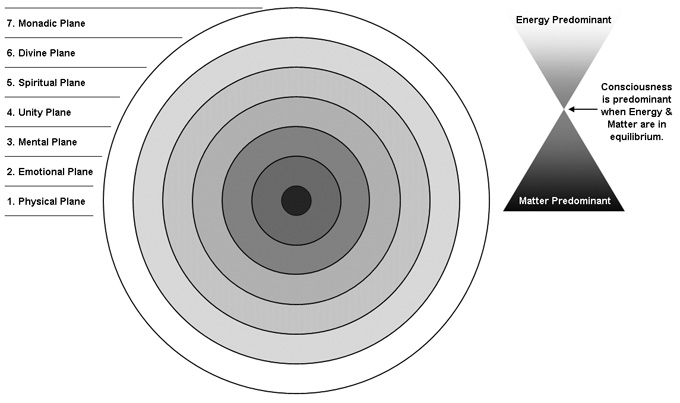 Out-of-body explorer Robert Monroe realised that the “locales” (planes) he visited had “rings” (sub-planes). He used the term “rings” rather than “subplanes” because the most natural shape in the universe is the sphere. Stars and planets are obviously spherical, but so too are galaxies and solar systems – the physical matter may be concentrated into a flat disc but the dark matter and dark energy (the subtle energy-matter of higher planes) forms a protective spherical “halo” around all galaxies and solar systems. So the planes, rather than being flat are actually a series of concentric spheres – as depicted in Figure 3c. Monroe had a system for referring to the specific subplanes (or rings) that he visited during his out-of-body experiences – he called them levels of “focus”. This very word “focus” (as in focus your mind) implies that Monroe knew these “locales” were related to levels or frequencies of consciousness. Refer to Figure 10a in Chapter 10 for more information on this.

Matter from the higher planes can easily penetrate matter from the lower planes because it is so much finer or subtler. At the start of the chapter, I described the vast spaces that existed between atoms of physical matter. Well these spaces are not empty; they are actually filled with subtle matter from the higher planes. I will give you a crude example: Imagine a wheelbarrow that is full of rocks. You might think that the wheelbarrow is full, but there is plenty of space between the rocks to accommodate a sizable quantity of stones. And even then it is not really full because you could fill the spaces between the stones with sand, and you could even fill the spaces between the sand with water.

That analogy gets the principle across alright, but it doesn’t portray the vastly different sizes of the “atoms” very accurately, so we need another example: One cubic metre of water weights 1 tonne, whereas one cubic metre of steam weighs only 590g (just over a pound). Water and steam are both composed of molecules of H20, the only difference being that steam is 1700 times less dense than water. Referring back to the central scale on Figure 3b, water would be on plane 1:2 and steam would be on plane 1:3, so the vastly different densities are due to an energetic rise of only one subplane. We can barely begin to imagine how subtle (or less dense) atoms and molecules of the emotional plane are, let alone those of the monadic plane.

Scientists who are busy looking for dark matter and dark energy in the depths of space actually need to look no further than the subatomic world, because it interpenetrates normal physical matter. Matter from all seven planes makes up everything we see around us, including our bodies. But we can only see the physical matter because that is all our consciousness permits at our present stage of development. Dark matter is etheric matter (the top half of the physical plane) and dark energy is matter from the higher non-physical planes.

Fractals are patterns that repeat themselves on ever-smaller scales, i.e. a pattern in the macrocosm repeats itself in the microcosm. For example: a galaxy is a rotating mass of stars around a central core. This same pattern can be seen on a smaller scale in the solar system with its planets rotating around a central sun. The same pattern can also be seen on a subatomic level with electrons rotating around the nucleus. So how does this relate to the seven planes? We already know that each of the seven planes has seven subplanes, but the scale also increases in magnitude. The seven planes that we have been referring to are actually equivalent to the seven subplanes of an even greater series of planes called the cosmic planes. The seven planes of our solar system are part of the cosmic physical plane (the lowest cosmic plane). There are seven cosmic planes – this means there is a total of forty nine planes in the universe.

Figure 3d depicts the organisation of the 49 planes. The left side of the diagram shows the seven cosmic planes, each with its seven subplanes making forty nine planes. Solar systems follow the same pattern only on a smaller scale, which can be seen on the right side of the diagram. The seven solar planes have been expanded to show the 49 subplanes. You will notice that the cosmic numbering system 1:1 up to 7:7 can easily be confused with the solar numbering system 1:1 up to 7:7. For this reason it is best to avoid the cosmic numbering system and stick to the numbers 1 to 49. The numbers 1:1 up to 7:7 are then reserved to identify the solar subplanes. The five white boxes on the far right of Figure 3d show the three planes that are significant to human beings. This subject will be discussed later, but for now just be aware that the physical plane has two halves (the physical and the etheric), as does the mental plane (the mental and the causal).

Figure 3d – The 49 Planes of Existence

At the end of the universe’s life, all matter will slowly disintegrate into 49-atoms then pass back into negative existence, causing the universe to gradually dissolve and contract back to nothingness. The process will begin all over again when the next universe starts to form.

Please click this link to read my latest theory about the universe.

Refer also to Article 10a

Previous: Article 2b
Next: Article 4a