6a – The Multidimensional Human

There is evidence to suggest that other worlds or dimensions exist just beyond the range of our normal perception, but we remain unaware of them because our minds are not objectively conscious of these higher planes. Our normal level of consciousness is restricted in some way, preventing us from tuning in to these subtler realms. If you have young children you might have noticed them looking a things that don’t appear to be there or talking to “imaginary friends”. Very young children can actually see into these hidden worlds, but they lose the ability as they grow older.

In altered states of consciousness the censorship of the physical mind ceases. Altered states can be induced by certain drugs, holotrophic breathing techniques and meditation, but they also occur naturally every night in the hypnogogic state when we are not quite asleep but not quite awake. Several years ago I woke up in the middle of the night to see a ghostly image of my partner sitting in a chair next to our bed. It was translucent white, dimly glowing and perfectly detailed. It was definitely Sarah, but her physical body was lying next to me asleep. To say I was surprised would be an understatement. My “fight or flight” response immediately kicked in and I had a fraction of a second to decide whether to hide under the covers or make a grab for it. I must have been feeling brave that night because I decided to make a panicky grab for it, but it vanished as soon as I “touched” it (my perception returned to normal). I didn’t actually feel anything and I only saw it for about two seconds but I was definitely awake (the adrenaline saw to that). I immediately woke Sarah to tell her what I had seen and ask her if she was aware of anything – but she was just aware of being asleep, and then being woken up! At the time I had no explanation for what I had seen, but it turned out to be one of the key events in my life which fuelled my desire to uncover the truth about our so-called “reality”. I now know this ghostly image was her emotional (or astral) body, and what it was doing away from her physical body will be described in Chapter 12.

Here is a simple exercise you can use right now to determine who you really are: Just sit down, close your eyes and become aware of everything within you. Start off by noticing your physical body – the fact that you are aware of it means that you must be more than your body. Then become aware of your emotions – the fact that you are aware of how you feel means that you are more than your emotions. Finally turn your attention to your thoughts – you will notice that thoughts just pop in and out of your mind without you actively thinking them. Because you are objectively aware of the thoughts in your mind, you must be more than your mind. You will realise that whatever part of yourself you focus on there will always be a sense of awareness that is somehow above and beyond everything else. This inner awareness or inner essence is the real “you”. It is the basis of all your experiences: asleep or awake, “dead” or “alive” – it is eternal.

You may have heard the expression “we are spiritual beings having a human experience” – it means that we are more than just our physical bodies. It means that we are pure awareness temporarily inhabiting a human body in order to develop our consciousness. Think of your inner essence as the pure white light of a movie projector and your life as the reel of film. The white light becomes coloured by its interaction with the film – giving it new depth. We develop new dimensions of consciousness from our interactions with life in just the same way.

In order to operate in a multi-dimensional universe we require a multi-dimensional body – or more accurately, a series of bodies which enable us to operate in all the “realms” of human endeavour. These bodies are all inter-linked and inter-penetrate each other because each one is more subtle (or less physical) than the previous. Our subtle bodies are sufficiently integrated that we experience ourself as a single being. For example, we consider our minds, emotions and physical body as integral parts of our being. Our personality is composed of a monad or Self (point of awareness), a causal body (field of awareness), a mental body (intellect and creativity), an emotional body (emotions and desires) and an etheric body (life energy), all of which operate through a physical body. As we develop, the focus of our consciousness rises higher and higher through these bodies, and beyond into higher/subtler bodies that develop later.

The physical body allows us to move around and interact with things in this physical world. It is like a virtual-reality suit that converts everything we touch, see, hear, taste or smell into electrical impulses that can be perceived by our other subtle bodies and our “self” (monad).

The emotional body is the home of our emotions and desires, and its aura allows us to subjectively sense our environment. For example: when we walk into a room soon after people have been arguing we can sense the tension. Our emotional bodies emit emotions into the environment and can sense those emitted by other people. This explains the shared feelings and emotions we often experience in group situations, such as supporting our favourite sports team or protesting in a rally. The effect can be so strong that normally pleasant people can end up doing unpleasant things.

The causal body is what differentiates humans from animals – we have them and animals don’t. The causal body performs four main functions in human beings:

The causal body is commonly called the soul, but it is not commonly known that it divides into two at the start of each new life and only a small piece actually incarnates. In simple terms, a piece of the causal body detaches itself from the main causal body and incarnates into a personality and a physical body in order to experience life as a human being. The lesser causal body collects life experiences and, after physical death, returns to the greater causal body to add its haul to the storehouse.

The Monad and the Three Triads

The monad is the true self – the source of our awareness. The monad contains everything it needs on its journey of awakening, but in the beginning all of its faculties are latent and undeveloped. It is only through experience that they unfold and become active. Monads evolve by ensouling a series of ever-higher life-forms. They temporarily embed themselves in life-forms in order to acquire experiences that will develop their consciousness. All life-forms are composites of primary, secondary and tertiary matter, plus one atom of quaternary matter – the ensouling monad which is in control of the life-form. In all there are forty nine levels of ensouling monad; one for each plane of existence.

A monad can simultaneously exist in three places at once:

Remember that monads are actually atoms on plane 49, but they embed themselves into an atom on plane 7 to oversee their evolution through the solar system. It is not possible for a monad to operate directly through a physical body because physical matter is too dense and the monad’s energy would fry the body’s nervous system. So intermediate components are needed between the monad and physical body to transform, or step down, the spiritual energies of the monad. In order for the monad to develop consciousness on the lower planes it must attach itself to an atom or molecule (of tertiary matter) from each lower plane. Note: the actual attachment of the atoms to the monad is done by devas. These atoms and molecules remain permanently attached to the monad for its entire evolutionary journey through the solar system, and act as “centres of consciousness” for the monad on the lower planes. Nine permanent atoms or molecules are required, and these operate in three triads (groups of three). Each triad permits the monad to develop consciousness on three planes at a time. Triads are only utilised on planes 1-7; beyond which monads operate through single atoms.

Figure 6a – Three Triads and Nine Permanent Atoms or Molecules

The two atoms and one molecule within each triad are connected by threads of consciousness that allow them to directly and instantly communicate with each other, but the communication links between three triads are much weaker. One of the main purposes of the causal body is to establish better communication between the units of the first and second triad, by building more substantial material links between them.

The third triad is called the “spirit triad” because the spiritual body, the lowest subtle body of the third triad, is where our spirit will eventually form. The spirit performs a similar function to the soul, only on a higher level. Its main purpose is to link the second and third triads together, but it is of little relevance to humans because most have not even linked their first and second triads together yet.

Permanent atoms and molecules are only centres of consciousness. The monad requires subtle bodies, such as the etheric, emotional, mental and causal, for it to function interactively on those planes. It is not my intention to fully describe the subtle bodies here; Chapter 11 is reserved for that. This chapter provides the background information such as how they are built, how they interact with each other, how they are refined, etc.

The mechanism by which our subtle bodies are built and refined is quite simple, but it may sound a little odd initially. Before I explain, I must remind you that everything is composed of vibrating matter and that there are seven grades of matter within each plane, one atomic and six molecular, which correspond to the seven subplanes of each plane.

Figure 6b shows the subtle bodies a human being possesses. Each subtle body has three main structural components: 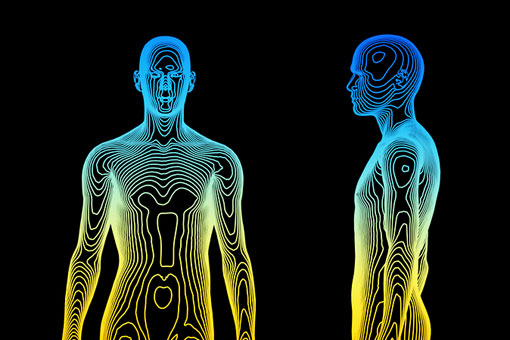 Previous: Article 5a
Next: Article 6b