An Esoteric Theory of Everything

5a – An Esoteric Theory of Everything

Quantum foam, also known as space-time foam, is a concept in quantum physics proposed by Nobel physicist John Wheeler in 1955 to describe the microscopic sea of bubbling energy-matter. The foam is what space-time would look like if we could zoom in to a scale of 10-33 centimetres (the Planck length). At this microscopic scale, particles of matter appear to be nothing more than standing waves of energy. Wheeler proposed that minute wormholes measuring 10-33 centimetres could exist in the quantum foam, which some physicists theorise could even be hyper-spatial links to other dimensions. The hyper-spatial nature of the quantum foam could account for principles like the transmission of light and the flow of time. Some scientists believe that quantum foam is an incredibly powerful source of zero-point energy, and it has been estimated that one cubic centimetre of empty space contains enough energy to boil all the world’s oceans.

So, if we could describe a microscopic standing wave pattern that appeared particle-like and incorporated a vortex within its structure, we might have the basis for a theory that could unite all the current variants in modern physics. Figure 1 appears to meet these criteria – it is a drawing of a subatomic particle reproduced from Occult Chemistry by Charles Leadbeater and Annie Besant, which was first published in 1909, although a similar diagram was published in a journal in 1895. Leadbeater explains that each subatomic particle is composed of ten loops which circulate energy from higher dimensions. Back in 1895, he knew that physical matter was composed from “strings” – 10 years before Einstein’s theory of relativity and 80 years before string theory.

String Theory and the Standard Model

String theory proposes that everything is composed of incredibly minute strings or loops of energy-matter vibrating in ten (or more) dimensions. Our brains can only comprehend four dimensions – the three spatial dimensions (length, width and height) plus one temporal dimension (time). So according to string theory, six (or more) hidden spatial dimensions must exist beyond our perception. It is interesting to note that the ancient cosmologies of eastern religions are based on seven planes of existence, with our physical plane being the lowest.

According to Leadbeater the fundamental particle shown in Figure 1 is merely the fundamental particle of our physical dimension (plane 1) – for this reason I will refer to it as the 1-atom. 1-atoms are so small that modern science has not yet detected them, but they were theorised back in 1974 by Jogesh Pati and Abdus Salam, who referred to them as “preons”. According to Leadbeater, two varieties of 1-atom exist (positive and negative), each with the same basic structure but the spirals spin the other way in the negative variety (see Figure 2). This is due to zero point energy flowing down through the negative atoms and up through the positive atoms.

The negative particles are not electrons; they are antiparticles. A particle of antimatter has the same mass and magnitude as an equivalent particle of regular matter but an opposite charge. For example, the antiparticle of an electron is a positron. A positron is identical to an electron in every way except that it has a positive charge. The existence of antimatter was not predicted by conventional science until 1928 and confirmed experimentally in 1932, yet Leadbeater knew about it over 30 years earlier.

1-atoms are far from being the ultimate fundamental particle from which everything in the universe is composed. Each 1-atom is composed of ten separate “strings” (closed loops) which are in turn composed of coiled loops of even smaller particles – see figure 3.

Figure 3 – The Microstructure of “Strings” in a 1-atom

Figure 4 – The Number of Subtle Atoms in a 1-atom

In addition to the four phases of physical matter (solid, liquid, gas and plasma) recognised by modern science, the alchemists of old recognised a fifth element. They believed everything was created from the five elements: Earth (solid), Water (liquid), Wind (gas), Fire (plasma) and Aether (ether). They recognised aether as a phase of subtle matter that filled all space and supported the propagation of electromagnetic waves (e.g. light and magnetism). According to Leadbeater there are actually seven phases of physical matter; and where that ends different kinds of even subtler matter begin. The three lowest phases of physical matter (1:1, 1:2 and 1:3) broadly correspond to solid, liquid and gas. The four higher phases of physical matter (1:4, 1:5, 1:6 and 1:7) are etheric, and are what science refers to as subatomic particles or dark matter. 1-atoms belong to the 1:7 phase and combine in many different molecular permutations to produce the hundreds of sub-atomic particles and chemical elements known to science.

Figure 6 – Subcomponents of a Hydrogen Nucleus

Conventional science doesn’t consider it possible for antimatter to be a constituent part of physical matter because the matter and antimatter would annihilate each other if they ever touched, but they have no reason to touch under normal circumstances. According to Leadbeater, even the 10 strings of a 1-atom never touch each other. If a positive 1-atom (matter) did come into contact with a negative 1-atom (antimatter) each would breakdown into 49 2-atoms. 2-atoms are so subtle that conventional science regards them as pure energy (dark energy).

Conventional science cannot account for the disappearance of all the antimatter that was produced in the Big Bang. According to the Big Bang theory, equal amounts of matter and antimatter were created at the birth of the universe, but scientists can’t explain why so little of it exists today. Could it be that all the “missing” antimatter is hidden within regular matter?

Figure 7 depicts the subatomic structure of a hydrogen atom (in the 1:3 gaseous phase) and its decomposition through four etheric phases:

Leadbeater did not state what the membranes surrounding the molecular structures are composed of, but they are probably 2-atoms or 3-atoms.

Figure 7 – The Decomposition of Hydrogen

Figures 1, 2, 3, 5 and 7 are extracted from Occult Chemistry by Charles Leadbeater and Annie Besant. The book depicts the subatomic structure of every element in the periodic table from Hydrogen to Uranium, including various isotopes (atoms with the same atomic number but different mass numbers). Leadbeater knew that isotopes existed in 1907 – five years before conventional science discovered them.

Leadbeater described something very similar to the Higgs field over 50 years earlier in Occult Chemistry. He explained that an incredibly dense substance, which he called koilon, permeates the entire universe, and that every atom of matter corresponds to an empty bubble in this incredibly dense substance. It helps to think of the universe as a mirror image of another reality (the anti-universe) where empty space is not empty but is filled with dense koilon, and where particles are not matter but are empty bubbles. If our universe is positive existence, then the anti-universe is negative existence (see Figure 8).

The koilon (or Higgs field) that fills the anti-universe is an incredibly dense, homogenous and fluid “sea” of negatively existing matter. Everything is reversed in our universe, so matter is incredibly subtle in the higher planes and increasingly dense in the lower planes. It therefore follows that something corresponding to the incredibly dense, homogenous and fluid “sea” of koilon should exist below the physical plane. In 1924 Satyendra Bose and Albert Einstein predicted the existence of just such a phase of matter – they called it Bose-Einstein condensate (BEC). But it was not until 1995 that the technology existed for it to be produced in a laboratory. Eric Cornell and Carl Wieman, of JILA at the University of Colorado, cooled rubidium atoms to less than 170 billionths of a degree above absolute zero, which caused the individual atoms to condense into a collective “superatom” which behaved like a single fluid entity. Bose-Einstein condensate is not physical matter but something just below it. It is a phase of matter that has completely different properties to any other kind of matter known to science.

Atoms in a gas at room temperature move at about 1,000 miles per hour. They slow down to about 1 metre per hour as the temperature approaches absolute zero, but the atoms in a BEC barely move at all. When the atoms stop vibrating they are able to share the same space, since atoms are 99.999999% empty anyway. Bose-Einstein condensate can only exist at absolute zero (-273°C); a temperature so cold that the energy aspect of energy-matter becomes zero. Absolute zero is the baseline that prevents creation from descending any lower – it is quite literally the bottom of the universe. 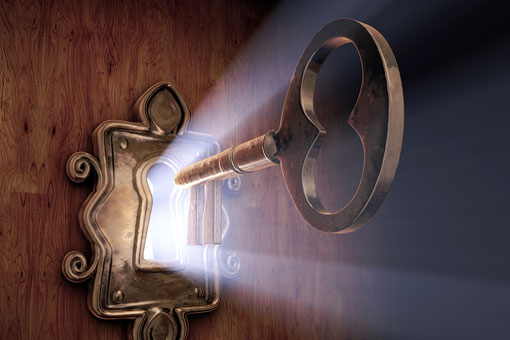 The Science of Spirituality

Previous: Article 4a
Next: Article 6a